Katelios (translation: under the olive trees)
Katelios is the nearest beach town, located at a five-minute drive from from the house. It consists of a higher part, ‘ano Katelios’, and a lower part direclty connected to the shore, ‘cato Katelios’. There are several swimming pools available for use in the valley of Katelios, and you will find some supermarkets and restaurants there. Katelios also has a nice beach, but for a very special beach you have to drive a bit further. 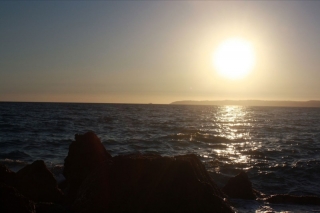 Getting to this beach requires a fifteen-minute drive. Because of the recently paved road the challenging descent is doable. Halfway the descent you will pass a small cafe with snacks and drinks. Highly recommended in combination with a beautiful sunset!

Beach, Kaminia
This beach owes its name from the brick kilns that used to stand there. Paralia Kaminia is a broad, sandy beach and reaches from Katelios to Skala. Seaturtles lay their eggs on this beach and volunteers from the Turtlewatch make sure that they can do this safely. You get to this beach by driving in the direction of Skala. When you get to the village Ratzakli, take the road down to the beach.

Seaturtles
You can often see the seaturtles that lay their eggs in Kefalonia and Zakinthos in the port of Argostoli. They often gather around the fishing boats and feast on the fish that is thrown overboard. This is an underground lake, with beautiful, blue water. The ceiling has partly collapsed, causing a ghostly light effect on the water. The water moves trough two subterranian channels from Katavothri to the cave of Melissani. The force of the water was formerly used as a power source to drive mills. There is still one mill working. The cave of Melassina can be visited by boat everyday between 8.00 and 18.00.

Drogarati
These are stalactite caves. These caves are located on the road between Sami and Argostoli south of Sami. There is a giant room full of stalagmites in these caves, which is used for for example concerts. Drogarati is opened for visitors everyday between 8.00 and 18.00.

Myrtos
One of the most beautiful beaches of Greece. Easy to combine with a trip to Assos and Fiskardo. 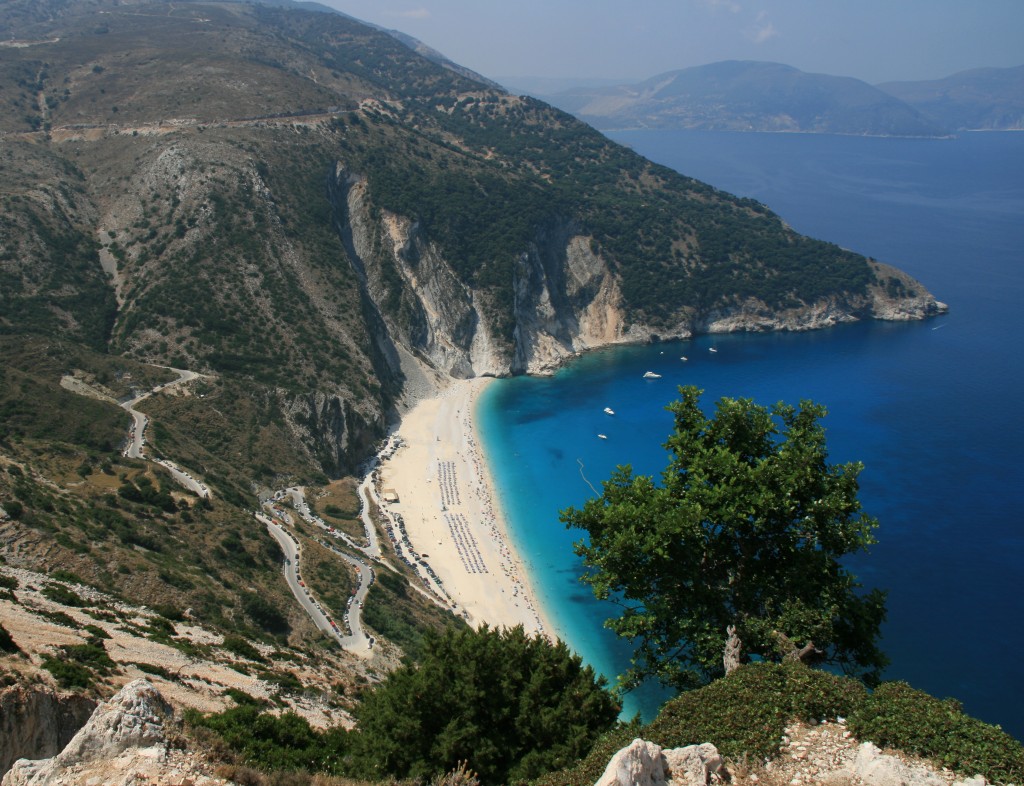 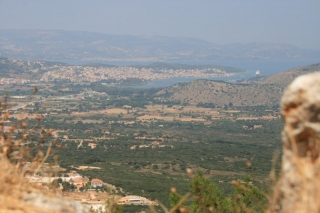 The capital of Kefalonia is a modern city and is beautifully located in a bay. The archaelogical museum (opened everyday except monday from 8.30 to 15.00) has some interesting objects from graves of the Mycenaean times: weapons, sarcophagi, jewelry, golden coins and tools. These objects are found all over the island, but especially in Kolokata, Metaxata and Mazakarata. In the urban library (Korgialenios) you can find costumes, old interiors and a few old icons (opened daily from 10.00 till 12.00 and 18.00 till 21.00, closed on sundays and holidays). Southeast of the capital are the remains of the antique city Krani (parts of the city wall, altar and temple). On the waterside you have a nice view of the Draponosbridge (1813).

Agios Andreas
The former capital of Kefalonia. You can still find a beautiful castle (Agios Georgios with canal and bridge) and ruins of houses and churches. From the 300-meter high summit you have an amazing view. In the vicinity is also the monastery Agios Andreas with fresco’s and 16th century icons.

Assos
Town with a 16th century Venetian castle. The castle was meant to defend the island from pirates and was later on used as a Greec prison. Assos is a charming fishing village with sand beaches, white houses and a nice wharf. Port in the northern part of the island. There are enough buildings left, partially rebuilt, to get a good impression of the Venetian style of the island before the earthquake.